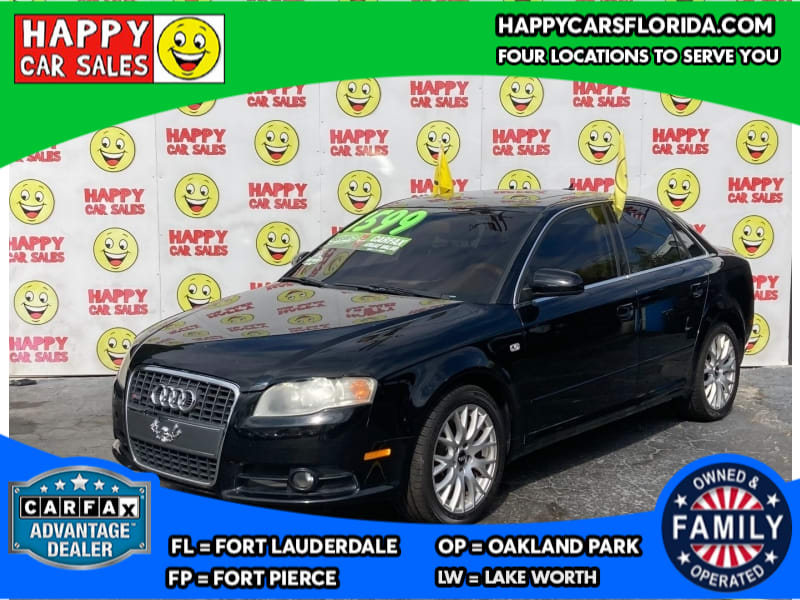 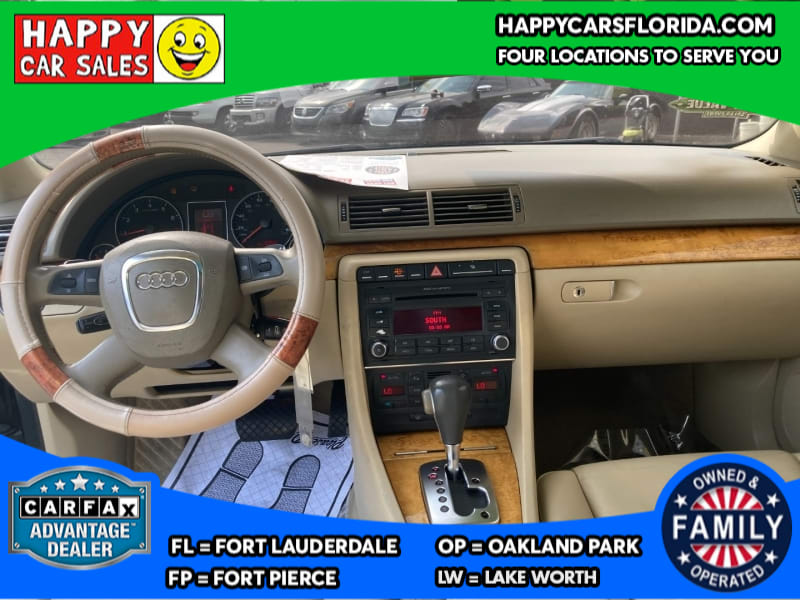 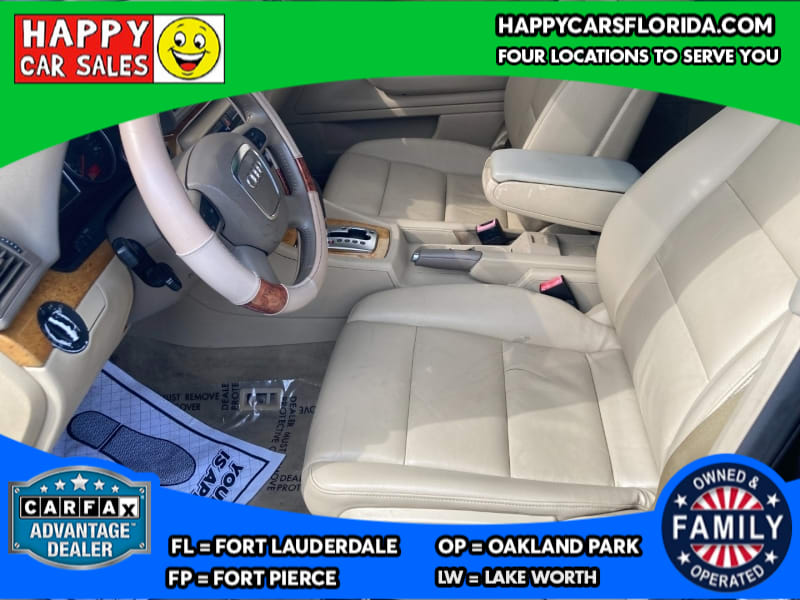 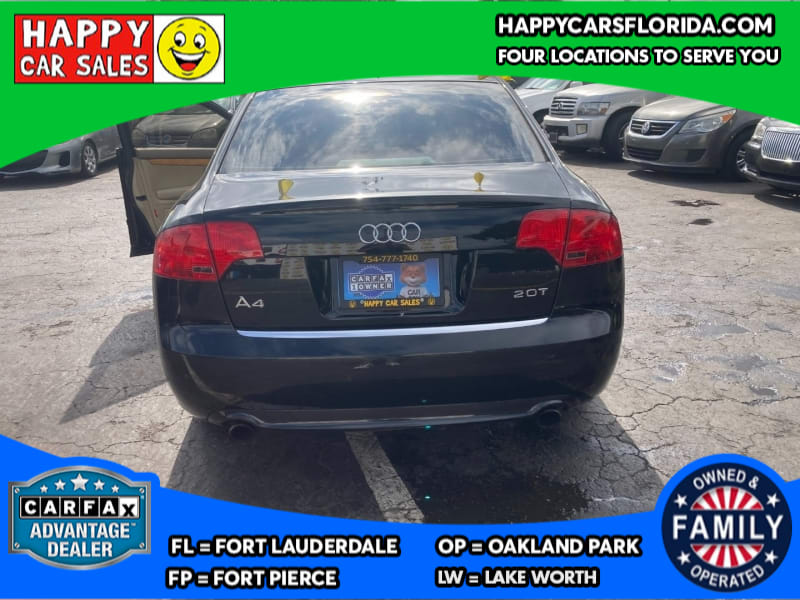 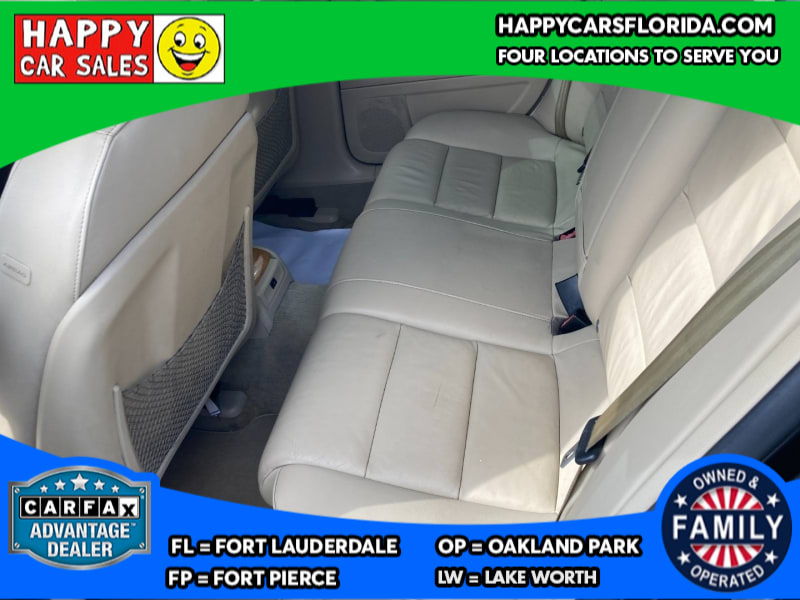 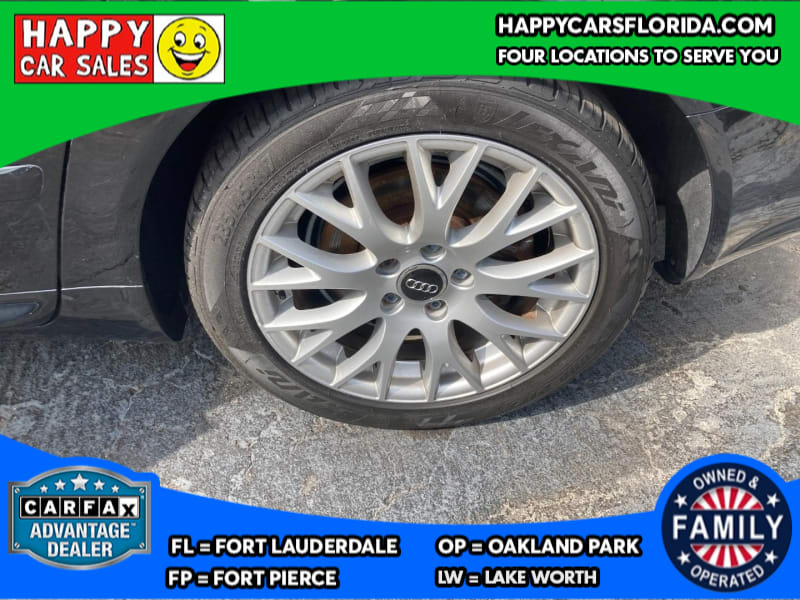 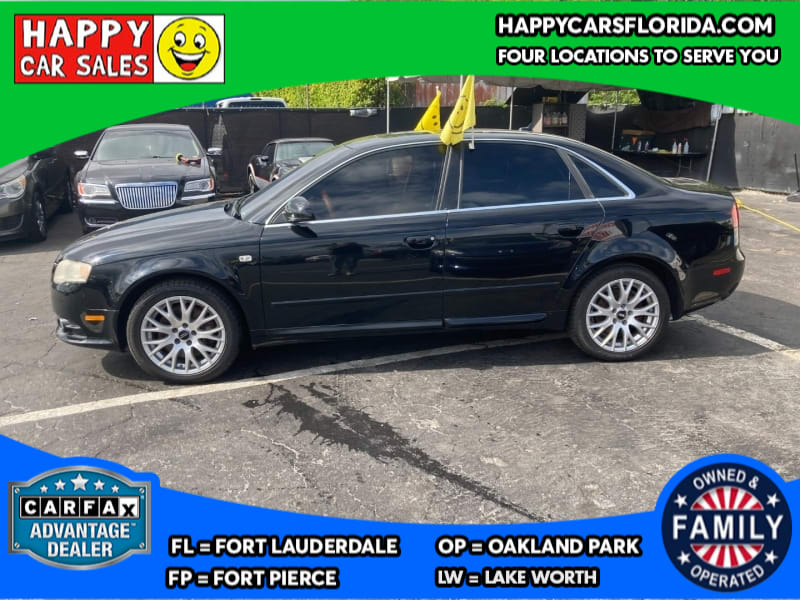 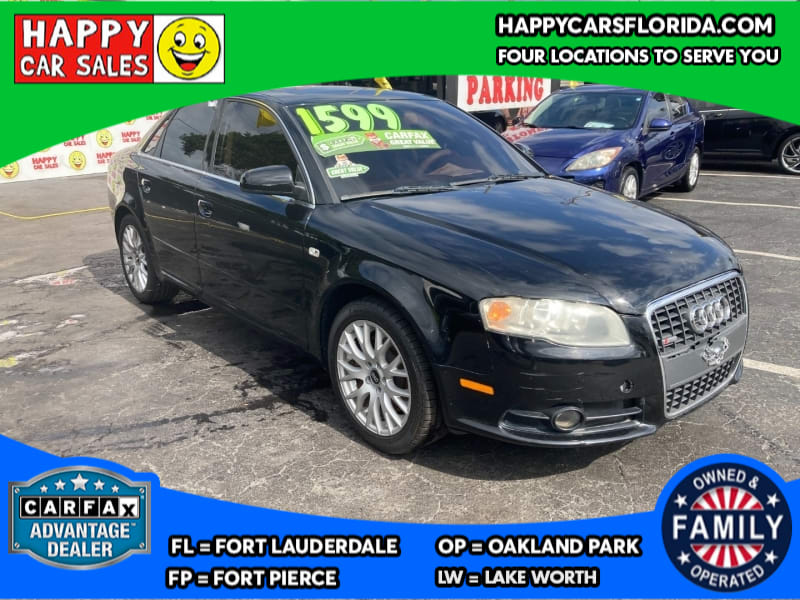 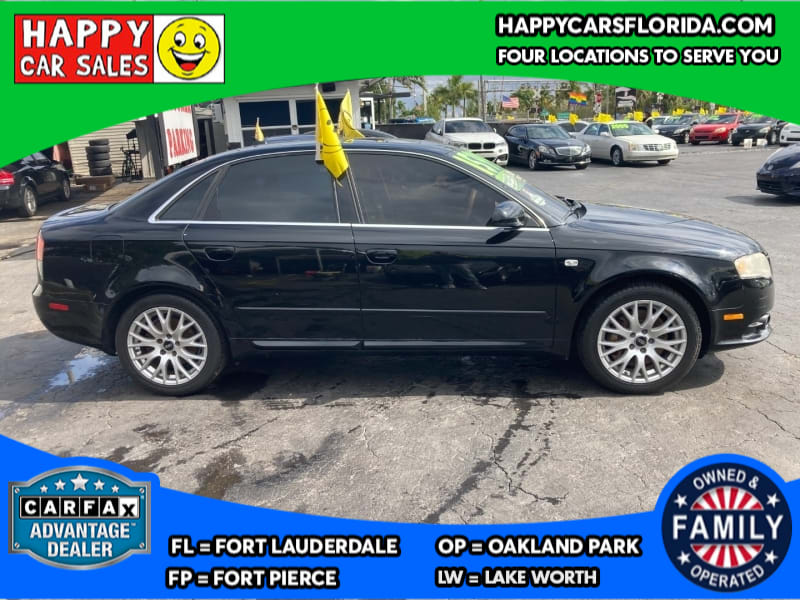 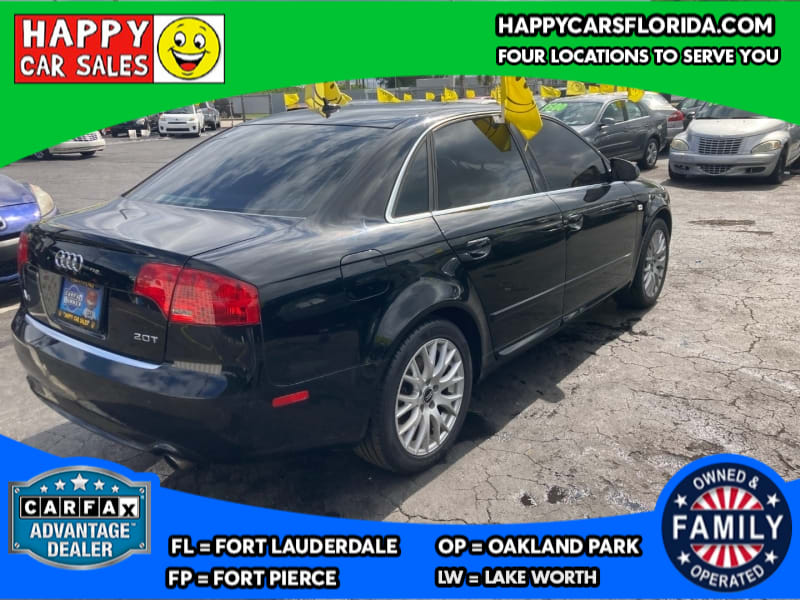 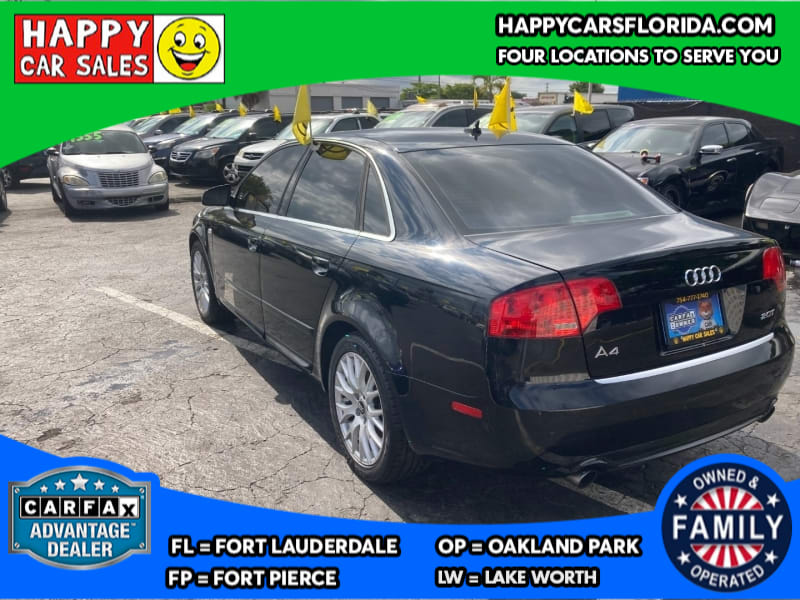 The stylish A4 is made even more attractive by its window sticker. The entry-level 2.0T's Manufacturer's Suggested Retail Price (MSRP) starts just under $30,000; quattro all-wheel drive bumps the starting price to nearly $32,000. The A4 3.2 starts around $37,000 for the front-drive and $38,000 with quattro. Fair Purchase Prices, which reflect what buyers are actually paying at dealers, shows prices hovering between MSRP and dealer invoice. As always, be sure to shop and compare using current Fair Purchase Prices. In terms of resale value (an important factor to consider when comparing vehicles), Kelley Blue Book expects the Audi A4 to hold its value better than the Volvo S40, Infiniti G35, Mercedes-Benz C-Class and Saab 9-3, but to fall just short of the BMW 3 Series and Acura TL.Driving The Used 2008 Audi A4We drove the six-speed automatic and six-speed manual versions of the 2008 Audi A4, each with the four-cylinder turbo engine and quattro all-wheel drive. While the automatic model was a joy on the highway â delivering a quiet, comfortable ride, inspiring stability and with plenty of power to pass â the transmission magnified the engine's turbo lag in the stop-and-go of city driving. The manual car, on the other hand, was equally impressive on the highway while also providing more of the kick we expect from a sports sedan. When sunny skies turn to rainy weather the all-weather traction advantages of the renowned quattro all-wheel-drive system are much appreciated and, even in dry weather, we could feel its calming influence while negotiating curving on-ramps and the like.Interior ComfortThe A4's rear seat can be tight on legroom for some, and the front armrest can interfere with the parking brake lever. Beyond these minor points, however, we find the A4's comfortable, stylish and well-crafted cabin nearly without fault. The textured aluminum is one of the finest examples of interior metal trim we've ever seen, and every surface and seam is pleasing to both the eye and the touch. If you're looking for a nice place to spend a commute, you won't have to look beyond the A4.Exterior StylingFrom the side, it wouldn't be hard to mistake the 2008 Audi A4 for the last-generation car (model year 2002 to 2005). And if your vision isn't what it used to be, you might be excused for confusing the two from the rear. But only from a mile away, on a moonless night in the middle of the Black Forest, could you mistake the two models from the front. At first, we thought the Audi family's trapezoidal big-mouth grille looked less graceful on the A4 than when we first saw it on the larger A6 and A8. But, like its big brothers, the A4 seems to embrace its identity a little more warmly every time we see it.Favorite FeaturesOne-Touch WindowsEven when we expect a vehicle to have four one-touch up/down windows, we're still delighted with their ease and convenience. They make life a little easier.Audi NavigationThe simple and intuitive touch screen fits nicely into the dash. Behind the flip-down screen you'll find two SD memory card slots, which can be used to play MP3-formated music files through the audio system.Standard FeaturesThe base A4 powertrain includes a four-cylinder turbo engine, six-speed manual transmission and front-wheel drive. In addition, the well-equipped entry A4 features an AM/FM stereo with in-dash six-disc CD changer, one-touch up/down windows, keyless entry, dual-zone automatic climate control, cloth seats, leather-wrapped wheel/shifter/handbrake, four-way adjustable/multifunction steering wheel, cruise control, fog lights and 16-inch alloy wheels. Standard safety equipment includes a sophisticated anti-lock braking system (ABS), electronic stability control, active front head restraints and front, front-side and two-row head-curtain airbags.Factory OptionsIn addition to an impressive list of standard features, the A4 also features a long list of options, including a choice between leather and premium leather seating, DVD-based navigation, premium sound system, heated seats, driver-position memory, rear-window sunshades, SIRIUS Satellite Radio, wood trim, Homelink, auto-dimming/power-folding outside mirrors, bi-xenon adaptive self-leveling headlamps, retractable high-pressure headlamp washers, 17-inch wheels, a sport suspension and rear side-impact airbags.Engine & TransmissionThe A4's available four- or six-cylinder engines come with sophisticated FSI Direct Injection technology designed to deliver increased power and better mileage. The V6 is the smoother and more powerful engine of the two, but the four-cylinder turbo is lighter (promoting better handling), less expensive and delivers better fuel mileage. Also available in varying combinations are front-drive and quattro all-wheel-drive systems, plus six-speed manual, six-speed Tiptronic automatic and continuously-variable transmissions. The front-drive V6 A4 comes with the automatic transmission only.2.0-liter in-line 4 Turbocharged200 horsepower 5100-6000 rpm207 lb.-ft. of torque 1800-5000 rpmEPA city/highway fuel economy: 20/31 (FWD, manual), 21/30 (FWD, automatic), 20/28 (AWD, manual), 19/27 (AWD, automatic)3.2-liter V6255 horsepower 6500 rpm243 lb.-ft. of torque 3250 rpmEPA city/highway fuel economy: 18/27 (FWD, automatic), 15/25 (AWD, manual) 17/25 (AWD, automatic)

The 2011 Cadillac CTS Coupe is a looker. It's a striking interpretation of Cadillac's sharp-edge sty ...